[…] “We’ve always done everything together, says Christian Ben Aïm, 35. In secondary school, we discovered mime, theatre and dance. I followed my older brother – François is five years older than me. Sometimes we don’t know if we are brothers anymore, or choreographers first, but we respect our family bond.”

An anomaly in the context of contemporary dance, the Ben Aïm brothers also have the makings of an incongruity. They love, they adore dance that dances, that seeks intoxication in sequences of new and precise steps. And they succeed marvellously in doing so, inventing a fluid and light writing, very swinging in the hips, which swirls around the stage like whipped cream. They also have a joyful, even playful mood, one that gives the movement a vital urgency. To jazz music, a remix of great classical ballet scores and the blues pop of the band Tiger Lillies, the brothers play the free men who have nothing to sell or demonstrate. “We don’t care if we’re not in tune with the times, says the elder brother. After a darker period, we now want to tackle the same themes – identity, the relationship with others – but in the happiness of the encounter. And so much for fashion.” 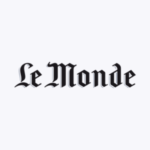 ALL IN JEST, La Terrasse